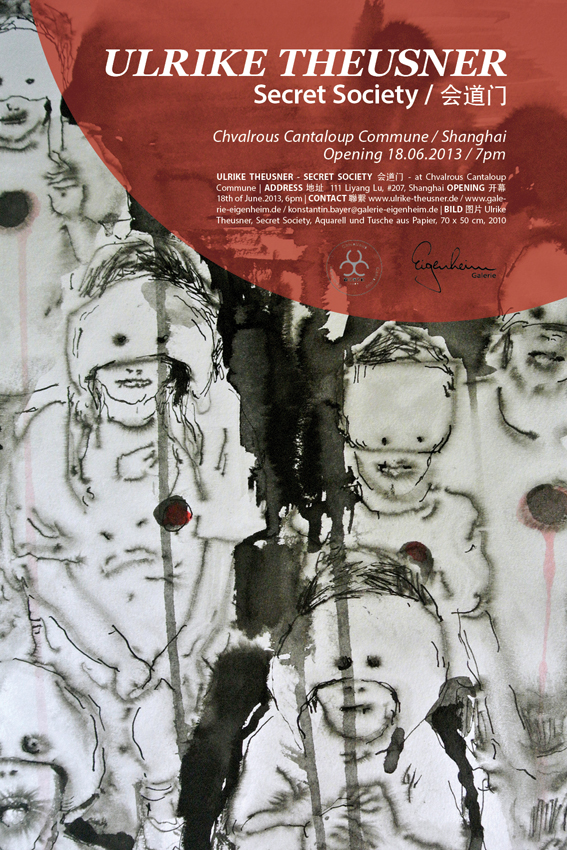 ABOUT THE EXHIBITION
Knowing Ulrike Theusner it is hard to believed that their work is of such a gloomy nature. Playing with the depths and desires of human existence she sometimes takes it easily, mixed with irony, sometimes violently reaching up to the extreme. Barrocke eccentricity, opulent gatherings, finely illustrated character studies, dark environments oscillate with excesses in color, a wealth of art historical references meet a nuclear first strike. The man becomes a mythical creature and still remains himself. This character studies are comprehensible integrated in environments which, in this way, tell magical and fairytale similar stories but in which at any time something seems to remain in the dark. The depicted scenes seem to have been taken from a hidden angle, in which man and his ugly kind is shown very puristic. Secret Society addresses these situations and its protagonists. It appears to be the situation which you can, after a long night, no longer remember or not wants to be remembered. Something which remains hidden in the subconscious and reaches back to the surface of perception only in dreams. - Konstantin Bayer -
„Basically, my work consists of exposing a mental world. I‘m assimilating reality in an expressive, elementary way. Things around me, that I see, sketch and collect during traveling, in TV, magazines, catalogs, publicity or the world of popular culture, people I meet - everything can inspire me, everything could be sketched. These quick pencil sketches with diary character are often the base of ink drawings or paintings.
Just playing around is one catalyst for creativity. Little monsters and puppets, kid masks, weird worlds and fictions - sometimes kid toys are my models for paintings and ink drawings. They help me create the opposite of the ‚hortus conclusus‘ by revealing a false, illusive idyll.“
- Ulrike Theusner -